The commission set up to investigate the government’s handling of the tsunami disaster has said that the information provided by Prime Minister Göran Persson’s office is insufficient. Persson’s staff have handed over only two pages of information on their actions following the tsunami.

Having read the two pages the head of the commission, Johan Hirschfeldt, has asked to interview civil servants and political appointees in the office.

Hirschfeldt said that he would not make public his opinion of the material. But Gustav Fridolin, Green Party member of the parliamentary constitutional committee, said that the submission was “very thin”. He added that in the best case scenario the government was hiding something, and in the worst case the government had done no more than was described on the two-page document.

The foreign ministry’s submission to Hirschfeldt was more detailed. An internal investigation into its actions published on Monday said that there were failures in the ministry’s operational leadership. The dossier shows that senior staff from the ministry kept in contact by telephone, which led to confusion and meant that information about the number of Swedes affected did not spread.

The absence of Jan Nordlander, the ministry’s head of consular affairs, was particularly damaging to Sweden’s efforts to tackle the crisis as it unfolded on 26th December. He was spending Christmas in Bergslagen, 200 kilometres from Stockholm. Other senior staff also stayed on holiday with their families.

By way of contrast, the report showed that the Swedish Embassy in Bangkok was quick off the mark in its response. Kaarlo Lasko, second in command at the embassy said in a radio interview on 26th December that there could be as many as 30,000 Swedes in the affected area. The report showed that this information was passed to the foreign ministry just two hours after the disaster.

Foreign minister Laila Freivalds was informed at 10 o’clock the same morning, although at this stage the focus remained on aid to Sri Lanka, despite the evidence that Swedes could have been hit.

Freivalds, who has faced heavy criticism for her handling of events, is now also being criticised for her attempts to pass the buck. Tuesday’s Expressen listed all the different groups that the foreign minister has tried to blame for Sweden’s late reaction to the tsunami. Freivalds had tried to blame Sweden’s ambassador in Thailand, junior staff at the foreign ministry, the Thais, her press secretary, the media and Christmas for perceived failings in the ministry’s response to the disaster, the paper said. 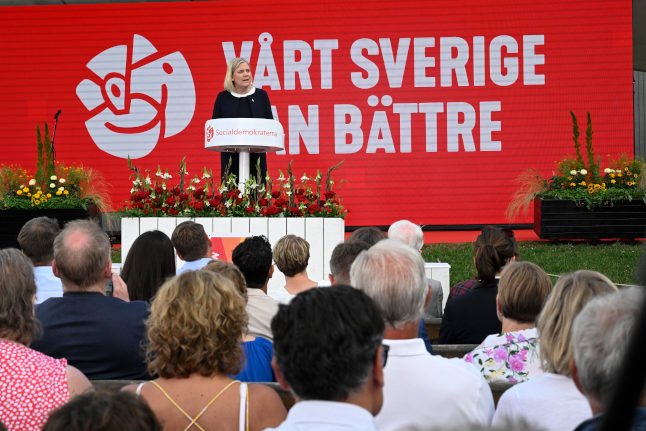 “I love Sweden and I’m proud to be Swedish.”

If you want to win the hearts and minds of Swedes, talk about the loveliness of long summer nights, barbecues and wild swimming, and do so from a stage in one of the most picturesque towns in Sweden.

Prime Minister Magdalena Andersson understood that much when she last night, on the first day of Sweden’s annual political festival Almedalen Week, gave a speech that did not shy away from invoking some of the most proudly Swedish of perceived Swedish features and values – everything from fields of daisies to trust, solidarity and hard work.

It was a speech clearly designed to reclaim patriotism from the nationalists ahead of the September 11th election, with a grand total of 71 mentions of “Swedish” or “Sweden” in half an hour. There was so much talk about Swedish values that it felt at times like those forced-collective notes you get in the laundry room: In this housing association we don’t leave fluff in the dryer. “In Sweden we don’t queue jump – not the supermarket queues and not in healthcare.”

“Sweden should be that Sweden which we love in every neighbourhood,” she said as she pledged to crack down on segregation and gang crime, one of three priority areas she has previously laid out for her government.

When it came to her other two priority areas, she spoke relatively briefly about the climate crisis but spent considerably more time on her third pledge to stop privatisation and profit-making in the welfare system – an issue where the Social Democrats have tried to firmly return to their traditional left-wing roots, while moving right on crime and punishment.

If you think I’m not talking much about specific policies, it’s because the speech didn’t address them much – but to be fair to the prime minister, an Almedalen speech at the height of summer rarely does. Andersson even said it herself: “What’s at stake in this election is more than different opinions on exactly how many prison cells we need (…) it’s which values should permeate Sweden. What kind of country we should be”.

But can a technocrat such as Andersson sell that vision? A former finance minister with a successful track record, she carried herself with the most gravitas when she spoke about the negative effects on the economy on the back of Russia’s invasion of Ukraine, referring to the high rate of inflation as “Putin prices”. As a leader who enjoys far higher confidence figures than her main opponent – Ulf Kristersson of the Moderate Party – she sounds more convincing when talking about the economy and specific policies than about her love for “Swedish nature, the right to roam, paddling silently over a quiet lake or smelling the coniferous forest”.

I’m curious to know how you as a reader of The Local feel when politicians talk about “Swedish values”. Do you feel included or excluded, does it depend on how they talk about them and if so, what makes the difference? Is it possible to paint a positive patriotic vision? We’re likely going to hear much more talk about Swedishness and values from other politicians in the coming days at Almedalen Week, so feel free to email your thoughts to me at [email protected] – if I’m allowed to share them on The Local or in a future newsletter, please state so clearly in your email and whether or not we may use your name.

You can read Andersson’s full speech in Swedish here and watch it here.

Andersson also spoke about Sweden’s military defence and landmark decision to join Nato (“it’s how we best defend Sweden’s freedom, democracy and our way of life”), and it was fitting that she did so during Almedalen Week, which is held in Visby on the island of Gotland.

Gotland, as you probably know, has received attention in Sweden and beyond in the past months. Strategically located in the Baltic Sea, the popular tourism island was at the centre of Sweden’s defence debate even before the invasion of Ukraine, and that’s even more the case now.

We can expect foreign policy to play a bigger part in this election campaign than it normally does, after Sweden and Finland last week struck a deal that moved them one step closer to joining Nato.

The most controversial point of that deal is Turkey’s claim that Sweden promised to extradite 73 individuals Turkey labelled “terrorists” in exchange for them allowing Sweden to join Nato. Swedish ministers have since said that it is in the hands of independent courts and Swedish citizens cannot in any case be deported, but Andersson has stopped short of fully denying it, and there is growing concern among Turkish and Kurdish refugees about the protection of non-citizens vs realpolitik.

It’s another example of how important it is that the voices of non-citizens are also heard in the political debate – there are a lot of people who live in Sweden, perhaps even intend to stay here permanently, who are just as invested in its future as everyone else, but aren’t yet formally citizens.

The election on September 11th is likely to be a crucial vote, with a win for the opposition bringing the anti-immigration Sweden Democrats their first chance to form national policy, and a win for the Social Democrats putting a fragile government in power for the third term in a row.

Almedalen Week is Sweden’s annual political festival. It takes place in the medieval town of Visby on the island of Gotland and is typically attended by around 40,000 people – 95 percent of them coming from outside Gotland. Interest has been falling in recent years, but with two months to go until the election, it’s a key event in all party leaders’ calendars.

The main highlights of the week will be the party leaders’ speeches at Almedalen, which will all be broadcast live at almedalsveckanplay.info. Sweden’s public broadcaster SVT will show them with expert comments immediately afterwards (in Swedish) – I had a look at their website and it should be possible to watch these wherever you are in the world.

Here’s when they’ll take the stage:

Thursday, 11am. Green leader Per Bolund.

Also, don’t miss The Local’s special Almedalen episode of our Sweden in Focus podcast. Our publisher James Savage and acting editor Richard Orange have been mingling with politicians and pundits and will have the latest news for you in a special episode which will be released this week.

The Local will as always cover the Swedish election from the point of view of international citizens living in Sweden. In our Sweden Elects newsletter, I will take a look every week at the issues that affect you; the biggest talking points; the whos, hows and whys; and several extra features just for paying members (you can find out HERE how to receive the newsletter to your inbox with everything included, and membership also gives you unlimited access to all of The Local’s articles).