Last Wednesday the government made public their stance on the digital radio issue. Culture minister Leif Pagrotsky, after years of dialogue between political decision makers and the radio business, chose to use Sveriges Radio’s Ekot and Dagens Nyheter as messenger.

Through short phone calls the previous evening, Swedish Radio (SR) and Teracom got to know what was happening. The commercial radio companies weren’t informed at all. The message was clear. There will be no digitalisation of radio through DAB in the foreseeable future. The government buried DAB despite hundreds of millions of tax payer money being invested in the technology.

To understand what the consequences are, it’s important to clarify what DAB would have given us.

Firstly, it would have given a more equal relationship between SR and commercial radio, through changed broadcasting conditions with a larger broadcasting coverage, better reach and stronger transmitters. Today local private transmitters are 1 000 watt, while SR has a national network with 60 000 watt transmitters.

Secondly, a reduction of the concession fees would have been needed for commercial radio to be able to invest in DAB, a reduction that would have given us the possibility to develop and expand our programs. Private radio has in the first ten years, 1993-2003, invested more than 1.2 billion SEK, without a profitable year.

The business turnover is 500 million SEK, out of which 125 million SEK goes to the government for the right to broadcast radio. SR has a budget of 2.2 billion SEK. Despite the tough circumstances for private radio 46.2% of the population aged 9-49 listens to private radio every day, while 37.1% listens to SR. In the younger target groups the difference is even larger.

Considering the business’ low profitability, an investment in new technology, without lowered concession fees, would have been impossible. Now that DAB is buried, commercial radio has no possibility to respond to SR’s expansive investments in new channels, expanded programs and new technologies such as podcasting and webradio.

Commercial radio’s competitiveness on the advertising market is further weakened by the government lowering advertising tax and favouring daily papers and TV through digitalisation and a greater reach.

But despite the DAB project ending, commercial radio will not give up the struggle for reasonable terms. We want to survive, we want to develop, and we want to continue vitalising radio in Sweden. Now we have to focus on the unsolved issues, and we will intensify our efforts. We have requested to immediately meet with the cultural ministry to discuss our three main demands for the business’ continued survival:

Ever since commercial radio started during the non-socialist government in 1993, we’ve been a thorn in the eye of successive social democratic governments. In an interview in the SR show P4 Extra last Wednesday, Pagrotsky said that he cared about SR, and that he didn’t take the interests of private radio into consideration in the DAB decision. He thus cements a political stance that aims at obstructing commercial radio’s interests and future.

Now it’s up to Pagrotsky to prove the opposite. 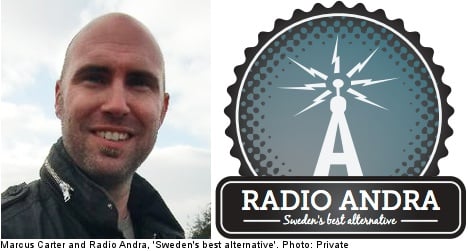 “Starting a radio station was never something I dreamed of as a child,” explains Marcus Carter, a British man with a university background in radio production.

On October 1st his new radio station – Radio Andra – will be officially launched; a channel he believes will fill a gap in the Swedish FM market.

“People are always coming out to Gothenburg for music festivals, and I realized that there was no radio station that reflected these people’s tastes. I was always waiting for someone to come along and make one,” he tells The Local.

“But it never happened. So I did it.”

The station, according to Carter, will feature a mix of new, known and underground artists, with classics, indie, and alternative music being the key focus.

“Of course, we won’t forget your Springsteen, Cohen, Cash and The Smiths, but we also play a lot the new Swedish music that’s not on the charts, as well as live club mixes on Friday and Saturday nights ” he explains.

Furthermore, the station will be transmitted in English some 90 percent of the time.

With the official launch just days away, the channel is looking for sponsors and advertisers as they already look towards expansion.

“We want to be useful for the expat community and for those that don’t speak Swedish. We’ll have news and traffic reports in English – initially just relating to Gothenburg but we’re already looking further.”

Carter arrived in Sweden ten years ago after he met a Swedish woman in England and abandoned his studies. He confesses to “going down the wrong path like an idiot”, becoming a media and English teacher in Gothenburg.

However, it wasn’t long before he noticed that life can be tough for foreigners who don’t speak Swedish – an issue he hopes to alleviate for others in the same situation.

“Hopefully people will recognize that we’re doing something good with our station. I know what it’s like to move to Sweden and not understand a word. You need to know Swedish to get by fully,” he admits.

“I remember the first time I tried to fill up my car at an unmanned petrol station. I didn’t understand a word of Swedish and there was no one around to help me. I had no idea what I was doing and that’s a feeling that a lot of people experience here. You miss out on a lot of things. Access to information really helps.”

When it comes to making it in Sweden, Carter is confident that the best advice is the simplest.

“Just go for it! There’s a lot of support for ideas in Sweden. I find that people here are rarely negative to a new idea and they love supporting people who dare to do something different,” he tells The Local.

“When I first came here I was really doubtful about how I would make a career for myself, but I quickly found that if you go out there and try, you will succeed.”

Radio Andra is currently streaming online at www.radioandra.se and will begin live transmission from 103.1FM at 7am on October 1st.

For more information, including dates and venues for the upcoming gigs during the launch week, check out their official site and Facebook page below.

MAKING IT IN SWEDEN is a recurring series whereby The Local highlights the stories of foreigners who have come to Sweden later in life and succeeded in carving out a niche for themselves in their adopted homeland. 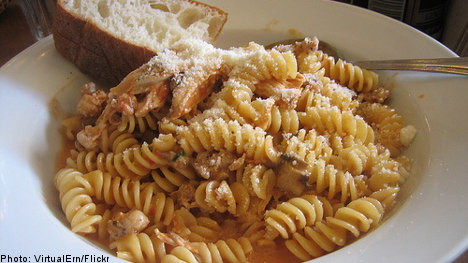 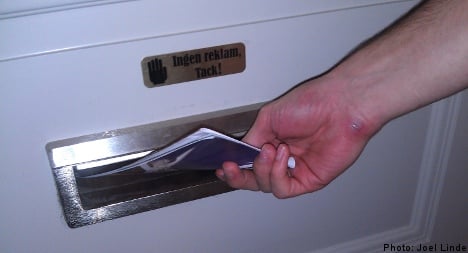