In glorious spring weather, Persson took to the newly built stage to rouse his supporters before the autumn election. But he was careful not to make any new election promises – although more can be expected in the manifesto which will be presented in the summer.

Persson was quick to criticise the alliance, and especially the plan to reduce the levels of unemployment benefit.

“We stand for improved unemployment benefit, they stand for worse. So people can choose,” said Persson, claiming that the conservative parties were trying to reduce unemployment by attacking collective agreements and workers’ rights.

“But why attack the unemployed when unemployment is falling?” Persson wondered aloud, before arguing that the whole idea behind the politics of Sweden’s right is to undo the Swedish labour market model.

Persson also stated that he did not think Sweden should compete with low wage nations. Conservative policies would lead to reduced salaries and not to well-paid jobs, he claimed.

The Alliance’s tax proposals also drew scorn from the prime minister. According to Persson, the conservative parties are proposing tax cuts of 250 billion kronor.

He used his speech to comment on the 4.7% drop in support experienced by the Social Democrats in the last month. But he said he was not worried by it.

“Not at all. This measurement is just as wrong as the previous one.”

The head of union organisation LO, Wanja Lundby-Wedin, also attacked the conservative alliance and the top dogs in Swedish business in her May 1st speech to 250 people in Kungsbacka.

“Shame on you, Leif Östling,” she cried, saying that the managing director of Scania had said that it would be good if Sweden could take in temporary workers from low wage countries at the pay rate of their homeland.

Finance minister Pär Nuder raged against the Confederation of Swedish Enterprise in his own speech in Norrköping.

“Withdraw your campaigns against the labour movement,” he said, in front of a couple of hundred demonstrators who braved the chilly winds.

Nuder accused the Confederation of wanting to upset the balance between companies and unions by proposing diminished rights for workers. He criticised the organisation for defending the ‘grotesque remuneration’ to directors and for getting involved in the election.

“The old Moderate Urban Bäckström who heads the Confederation of Swedish Enterprise will say what ‘the coward Fredrik’ doesn’t dare to say,” said Nuder.

Before that he had criticised Fredrik Reinfeldt for representing “the same old right”.

“The only new thing is that they don’t dare to stand up for their policies. It’s time to reveal the Moderates bluff and to fight for the welfare state,” he said. 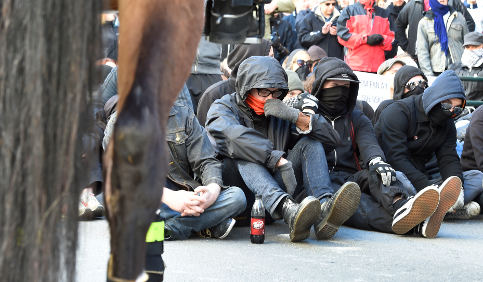