Far right groups have called for a gathering in the Swedish capital’s Rålambshovsparken before a planned march, while the Antifascist Aktion (AFA) group plans to congregate at Kungsholmstorg to stop the march.

Police are say that the tension building up before National Day is worrying.

“We will have a rather large police presence out to take care of all contingencies that could pop up,” said Kjell Lindgren, police spokesman.

Recent clashes between extremist groups have not been peaceful. There was a fight between groups at a train station north of Stockholm about two weeks ago, and a few days later, a 21-year-old man was stabbed in the back during a clash at Gullmarsplan.

Extremist groups marched last year under the watchful eyes of Stockholm riot police, but nobody was injured.

June 6th celebrates Gustav Vasa’s 1523 accession to the throne, which ended Danish rule, and the 1809 adoption of a new constitution, kicking off Sweden’s democratic tradition.

But while streets and buildings have traditionally been bedecked in the blue and yellow of the Swedish flag for the day, it only became a bank holiday following a vote in parliament in December 2004. 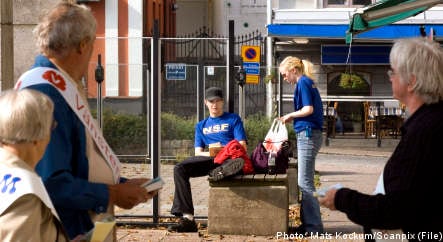