Svensk Kassaservice came into being after the restructuring of Posten, the Swedish post office, at the beginning of the decade. It is a subsidiary of Posten whose function is to provide the general public with the possibility to pay bills and take out money anywhere in the country.

The company’s transaction volume has gone down by 65 per cent since the beginning of the decade and is expected to continue falling at a rate of 15 per cent per year.

According to PTS only 1 to 2 per cent of the adult population now uses Svensk Kassaservice to pay bills or take out cash.

Svensk Kassaservice has 1,700 employees working in a total of 380 offices.

Every year the state pays Posten 400 million kronor to run Svensk Kassaservice. The business has long been a loss maker for the postal service. Despite the 400 million kronor subsidy Posten is only now managing to make the company break even.

In 2003 Posten asked the government to decide who was to be responsible for the payment system in the countryside. PTS has now concluded the subsequent investigation, which suggests that Posten is in effect free to wind down Svensk Kassaservice, even in the countryside.

The reason is that there are already a series of other actors, such as petrol stations, supermarkets and banks, willing to perform the same function as Svensk Kassaservice. Such a solution would also be likely to entail improved opening hours, lower prices for customers and lower costs for the state.

A parliamentary decision and an amendment to the current law are necessary for Posten to be freed of responsibility for Svensk Kassaservice.

“We now see alternatives that are better for all concerned. Above all they are cheaper. And these actors are ready to take over if a decision is taken,” said Sten Selander, head of the postal department at PTS. 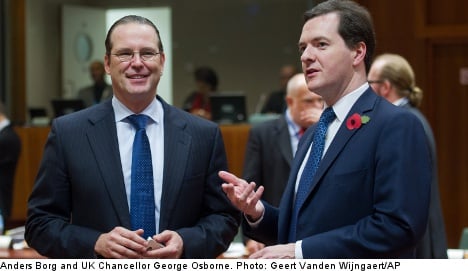 “As a balanced compromise we can live with this,” Borg said after the marathon meeting of EU finance ministers.

Borg expressed hope however of some adjustment to the deal in forthcoming negotiations with the European Parliament.

“I think that there is further work in trialogue that can move this forward, especially when it comes to using direct recapitalization by shareholders in the banks. There are further opportunities for improvement,” he said.

“But this is a significant step forward, and that means that in practice we have a solution for Swedish banks,” he added.

The deal basically reaffirms the so-called “bail-in” rule – meaning that banks are primarily saved by using their own resources, shareholders or even depositors.

“This establishes bail-in as the new rule. The goal is to have a common view on the matter throughout Europe so that our taxpayers will no longer have to shoulder the burden,” said Irish Finance Minister Michael Noonan according to AFP.

Although it is primarily shareholders and financiers who will be tapped for money, depositors with more than €100,000 also carry a risk of having to contribute.

“Swedish companies may very well become involved in paying for crisis-hit banks in ways that have not previously been the case. It will put more pressure on banks to act prudently. Both shareholders and their financiers will have to bear some of the risk,” Borg said.

States will however retain the possibility to intervene and save troubled banks.

“The Swedish government will go in when it comes to Swedish banks. Then Swedish taxpayers have an interest to act, if it creates serious risk of a long economic decline and high costs in terms of unemployment,” Borg said.