Nasa’s management team decided on Saturday that the extra spacewalk, the expedition’s fourth and Fuglesang’s third, would be necessary. But it will be a tough task for the Swede and the American.

“The spacewalk will last as long as is needed. We hope that the job will take less than six and a half hours,” said Tricia Mack of Nasa’s spacewalk programme at the Johnson Space Center in Houston on Sunday morning.

The two astronauts have already done two spacewalks together – both of which went according to the plans that have been many years in the making.

But this time there will be more improvisation.

The problem that they will hope to solve is that one of the solar arrays has not retracted properly. On the mission’s last walk, Robert Curbeam and Sunita Williams shook the box holding the array to ease tension in apparently misaligned guide wires.

That failed, so a new spacewalk will focus on the problem.

Discovery’s departure from the International Space Station, the extra safety check of the shuttle’s heat protection and the landing have been pushed back a day, leaving only one reserve day for the mission.

There are three options for the landing, which is scheduled for December 22nd at around 10pm Swedish time: the Kennedy Space Center in Florida, the Edwards military base in the Mojave desert in California, or the White Sands base in New Mexico.

The weather will decide which base is used, but the outlook for Friday is cloud in Florida. Nasa has the option of shifting the landing to Thursday. As oxygen reserves run down, Saturday will be the last possible landing date. 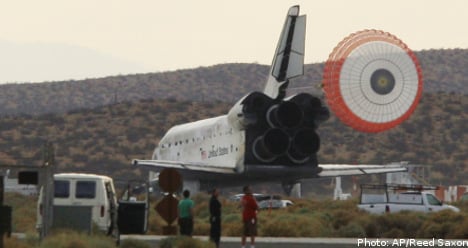