The Swedish team had defied expectations after securing a victory over Spanish team Desafio Espanol in the Louis Vuitton Cup off Valencia on Monday.

The success against the Spaniards in the eleven-team regatta was a vindication for a team which had struggled with financial difficulties for many years before securing a new sponsorship deal last March.

But the dream was to come to an end on Tuesday for the team founded by the late business mogul Jan Stenbeck and now operated by a syndicate headed by his son Hugo. The Swedes needed both to win against the Kiwis and for the Spaniards to lose to US giants BMW Oracle Racing. So while Desafio lost out to the Americans by 55 seconds, it was not enough to save the Swedes.

The Swedish crew’s skipper Magnus Holmberg doffed his cap to Emirates’ powers of recovery after his team gave Dean Barker’s crew a good run for their money.

“I don’t quite understand how they did it because they were in a very vulnerable position,” Holmberg said. “But they managed to hang on.” – and rein the Swedes in.

“We felt we had a chance to make it to the semis. It was bloody close and we didn’t make it all the way but that’s life,” shrugged the Swede.

BMW maintained their position at the top of the leaderboard with 37 points from 19 races, one clear of the New Zealanders.

The America’s Cup, the oldest active trophy in international sport, is currently held by Alinghi of Switzerland. The winner of the Louis Vuitton Cup will challenge Alinghi for the main prize.

By The Local and agencies 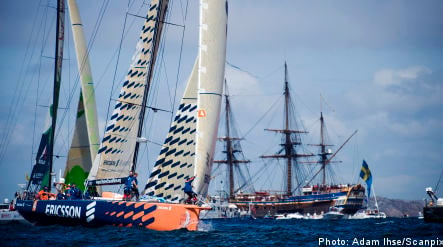 BO
Swedish and US yachts do battle over Stockholm stage

The VO70 yacht skippered by Brazilian Torben Grael came in third in the ninth and next-to-last stage between the Swedish port of Marstrand and Sandham near Stockholm, and cannot now be caught in the overall standings.

The short 525-mile leg was won by US entry Puma Ocean Racing, which recorded its first stage victory in the event.

Puma crossed the line at 10.40 pm, just metres ahead of the other Swedish entry, Ericsson 3, after a thrilling finish. Ericsson 4 arrived about 15 minutes later.

It was the second time a Swedish yacht has won the event after EF Language in the 1997-98 edition.

Ericsson 4, the favorite before the event began in the Spanish Mediterranean port of Alicante in October, has won five of the nine stages held so far.

There still remains an in-port race in Stockholm on Sunday and the 10th and final stage between the Swedish capital and St Petersburg in Russia, where the yachts are expected on June 27 at the end of the 37,000-mile event.

But only a maximum of 12 points remain to be won for any one boat, and Ericsson 4 has an unassailable 13-point lead.

The Ericsson team was by far the best prepared for the event, with a budget of €80 million ($110 million) for the two boats — Ericsson 4 and Ericsson 3.

The two Spanish yachts, Telefonica Blue and Telefonica Black, were expected to be its main rivals before the start, but both were hit by bad luck.

Grael, 48, a double Olympic champion and America’s Cup specialist, has won his first ever ocean race. He finished third in the last Volvo race in 2005-06 in charge of the yacht Brazil 1.

Puma’s win reinforced its claim to second place in the event. Its main rival for the spot, Telefonica Blue, skippered by Dutch veteran Bouwe Bekking, hit a rock as the yachts left Marstrand was undergoing repairs Monday prior to restarting the leg on Wednesday or Thursday.

The Volvo race, known as the “Everest of sailing”, started out in 1973 as the Whitbread race.

The 10th edition of the race involving the single-hull 70-foot (21.3-metre) yachts this time was longer and more arduous than ever, taking in Southeast Asia for the first time.

Eight teams started the event, but only seven are remaining after Team Russia withdrew.

The teams received points according to their position in each leg. Half points were awarded for the positions in the in-port races.