My first introduction to a Swedish Midsummer celebration was a bizarre experience. It wasn’t in Sweden for a start but in someone’s back garden in England.

Now, we British don’t have a mainstream equivalent – the nearest thing we have is an annual standoff at Stonehenge between some men in white pointy hats and others in blue helmets with riot shields, watched very nervously by civil servants from the Culture Department.

So when an expatriate Swedish family invited most of the village to this Midsummer celebration noone quite knew what to expect. We had heard rumours of nakedness and raw fish and being polite we depilated, ate beforehand and arrived on time for the celebrations to commence.

Now, in the back garden was a very fancy marquee, which always sets off a Pavlovian response in me. I equate marquees with the posher scale of wedding receptions, which means flowing champagne, little smoked salmon blinis, more champagne and being helped, somewhat dazed and confused, into a taxi home. So, life was on the up, I thought as I scanned the seating plan.

But things started to go wrong almost immediately when I discovered that I was sandwiched between two monosyllabic moustachioed gentlemen, Swedes who found themselves a long way from home and completely at sea amongst a table made up for the most part of the ladies from the village church flower arranging committee. So with the conversation not exactly flowing, I looked around for the champagne.

But no, first came the food, which didn’t bear any relation to smoked salmon blinis. The meal turned out to be crispbread accompanied by that hideous squeezy caviar. Just when things couldn’t get any worse on the catering front, out came the jars of those slightly phosphorescent pickled herrings. I could see the ladies from the flower arranging committee bracing themselves stoically for the removal of clothing.

The champagne was conspicuous by its absence but in its place was schnapps. Now, I am a girl who rarely says no but I cannot drink methylated spirits flavoured with essence of cut grass. The poor awkward Swedes, on the other hand, reached for it like drowning men to a lift ring.

Most of the ladies from the village church flower arranging committee rarely drink more than the odd sherry at Christmas time but being polite, they tried the schnapps, which the moustachioed Swedes, in a moment of desperate deviousness, had described as a ‘herbal tonic’.

The long and the short of it was that quite a few of the ladies from the village church flower arranging committee drank probably far more of the ‘herbal tonic’ than was strictly necessary. Before I could sink under the table in sober embarrassment, they were up and impersonating small frogs in the små grodorna dance with the moustachioed Swedes, who had by now been transformed by the magic of alcohol into life’s great bon vivants.

Fearing the imminent removal of clothing, I excused myself from the proceedings.

If you fancy an all together less surreal and more elegant way to herald in the summer, may I recommend the restaurant Fjäderholmarnas Krog on Fjäderholmen, Stockholm’s closet archipelago island. They have an excellent seasonal menu, including a mixed herring plate and an extensive wine list, but they also serve ‘herbal tonic’, should you feel the urge. 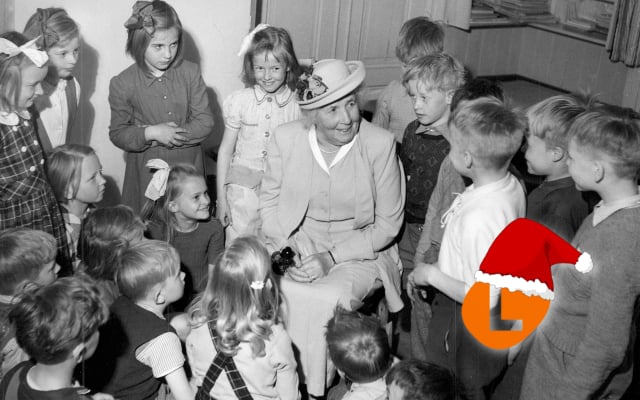 Swedish illustrator and writer Elsa Beskow did double-duty to make her mark on Christmas in Sweden. Photo: SvD/TT