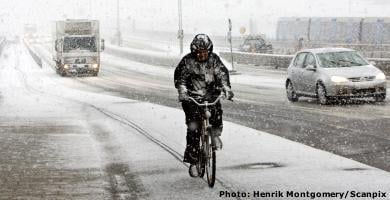 With northeasterly winds bringing a snow front in from the Baltic Sea, meteorological agency SMHI has issued a Class 1 warning stretching from Stockholm down along the east coast to Kalmar.

The Swedish Road Administration continued to keep a close eye on proceedings early on Tuesday afternoon.

“There have been a few incidents where vehicles have gone off the road. It has so far been mainly trucks, where they perhaps haven’t switched to winter tyres yet,” Nenad Matic, administration spokesman in Stockholm, told The Local.

Matic added that conditions were worst in southern parts of Stockholm county. While most main roads had been ploughed and gritted, there was a risk of icy conditions on smaller roads.

“It’s not like last year when it had been warm and then conditions suddenly changed with no warning. This year there have been a few snowfalls and people have a had a bit of time to prepare,” said Matic.

With the snow continuing to fall into Tuesday afternoon, Matic said there was a risk that many roads would again freeze over during the course of the evening.