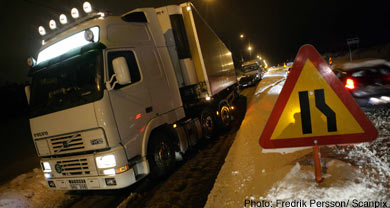 Thousands of people are believed to be stuck near Södertörn on the Riksväg 73 road between Stockholm and Nynäshamn. Fire officers hope that military all-terrain vehicles will help them get control of the situation.

“We’re going to see whether we can at least drive around those cars and trucks that are stuck, and get people to a place where they can get shelter and food,” said Lars Göran Uddholm of Södertörn Fire Brigade.

“We don’t really know what to do. The situation is getting serious. It has started snowing again and has got colder,” said Uddholm at 9.40pm.

More than ten centimetres of snow has fallen in some places. Slippery conditions and heavy snowfall led to a number of cars leaving the road, and snowploughs and gritting trucks have been unable to get through.

Uddholm said that the Riksväg 73 was “pretty much completely blocked” between Västerhaninge and Nynäshamn, a distance of 25 kilometres. Exactly how many people are stuck on the road is unknown.

Asked what could be done to clear cars from the road, Uddholm replied:

“We can’t do anything – just drive round them.”

The trouble started after the weather took a turn for the worse on Tuesday afternoon. The situation became even worse in the evening.

Police say that a number of Polish truck drivers heading for the ferry in Nynäshamn abandoned their vehicles once the traffic ground to a complete stop.

Roads in other parts of Sweden have also faced problems due to bad weather, but blockages elsewhere are not as serious as those in Södertörn. Småland and Östergötland counties are facing problems, with icy conditions causing a number of cars to leave the road.

Weather service SMHI is warning of continued heavy snowfall in the counties of Kalmar, Östergötland, Södermanland and Stockholm.

Find the latest forecast at The Local’s weather page