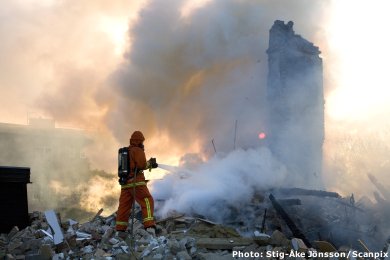 There have so far been no reports of any injuries. The fire is thought to have been caused by a gas leak.

“I was sitting working when I heard a powerful explosion,” Leif Jacobsen, who lives around 100 metres from the site of the accident, told Sydsvenskan.

“When I went out on the steps there was smoke pouring from Karsholmsgatan,” he added.

A further ten houses in the immediate area were damaged in the blast, with several having their windows broken.

Police have sealed off the area around the house as a precautionary measure.