Once known as the bastion of frump, PUB – Stockholm’s oldest department store – is in the midst of a drastic makeover, complete with retail liposuction and a commercial tummy tuck. With Cardigans lead singer Nina Persson at the creative helm, PUB is attempting to restyle itself as the department store equivalent of Madonna – timeless yet avant garde.

PUB.03 is the second of three “floors of fashion” to be open for public consumption…and a little shopping to boot. The result is a strange amalgam of Tim Burtonesque creatures, decapitated mannequins, fru fru and wax Chihuahuas.

“It is a dream assignment. We have tried to create something magical and fantasy-inducing. A strange, incredible environment that can inspire you to have fun with fashion,” Persson said in a recent interview in Svenska Dagbladet.

The renovated floor is one part retail, one part art and one part cuisine. The redesigned shopping area and newly launched art gallery, Operating Place, were unveiled on 27 September and the new restaurant, Publik, served its first lattes on Friday 2 November.

PUB, named after the initials of its founder Paul U. Bergström, first opened its doors in 1882. Persson is not the only Swedish bombshell to be associated with PUB’s history. Greta Garbo worked there as a sales girl in the 1920s before becoming a Hollywood femme fatale.

More recently, the store underwent an identity crisis, with a disjointed shop-in-shop concept and wares more likely to appeal to Princess Lilian than Princess Madeleine. PUB struggled as competitors such as NK managed to maintain their classic charm at the same time they attracted a younger clientele.

Several young British designers – Jojo&Malou, Junky Styling and White Noise, among others – have also found a home at “Made in London.” Persson, along with set designer Caroline Kugelberg, adds her own flavour with Vintage by Nina Persson, featuring hand-picked retro from the US.

Operating Place gallery kicked off with “c/o The Velvet Underground, New York, NY,” an exhibition originally shown at the Glenn Horowitz Gallery in New York in celebration of the 40th anniversary of rock band, The Velvet Underground. It’s also the place to go if you’re in the market for wax piglets or wombats, such as those by artist Hanna Beling.

Although the division between store and gallery is a little confusing (it’s not always clear what’s for sale and what’s just on display), PUB has certainly succeeded in changing its image. Nesting mannequins with bike-helmets-cum-bird-hats and child-sized ballerinas – outfitted in a witch’s hat and masquerade mask – twirling in a life-sized jewellery box give a first impression of being a bit weird and whacked out. Other idiosyncrasies include tutu-inspired dressing rooms and a silhouette of a carnivorous rabbit.

But it’s not the interior design that is the most sensational; the department store’s exterior display windows are even more provocative with their oversized creature masks, severed eyes and distorted heads.

Persson told Dagens Nyheter that in addition to creating the look and feel of PUB.03, their primary responsibility has been to design the display windows. “This seems like a bold project for being Sweden. It’s great that [PUB] has the nerve,” Persson told DN.

One window depicts an underwater seascape, with bats made out of socks, a sea witch and a misshapen female face emerging from the sandy bottom. Originally, fake 1000 kronor bills were also strewn throughout the display, but were replaced with toilet paper adorned with the royal mint after Swedish police confiscated the counterfeit money, despite the fact it was only printed on one side.

“My first reaction was a laugh and I wondered if they had called any newspapers…I know…a little disgusting, but it’s quite amusing that the windows are getting so much peculiar attention! Much more than I could have imagined,” Kugelberg wrote in the PUB blog she co-authors with Persson.

A handwritten sign in Swedish now informs passers-by that “the police took our money so now we have to use toilet paper.”

One of the more controversial display windows features a man dressed in a doctor’s coat standing with his back to the street. Various body parts and designer boots are strewn around his mortuary and heads float in miscellaneous beakers.

“Our idea was that he is an inventor who lives several floors under PUB and creates new people. A sort of Dr Frankenstein. He thinks that all of the mannequins are either too beautiful or too dreary and therefore gives them new heads,” Kugelberg wrote.

One of the themes is turning the expected upside down. One previous window, for instance, featured the insane Norwegian-born artist Kjartan imitating Marilyn Monroe in her famous windy-skirt pose. A replica of a 75-year-man posturing as a sex kitten – even one as vixenly as Norma Jean, does not a pretty picture make – but it did make for one interesting conversation with an Italian tourist who happened to walk by.

The gauche and the egregious are somewhat made up for by a dose of cheekiness and even a bit of self-reflection. Although Persson’s “fantasy-inducing” design might also be described by some as “gag-inducing,” she and Kugelberg have, through a fusion of fashion and funk, helped to turn a department store dinosaur into a sleeker, slimmer retail concept that has a fantastic selection of cutting-edge Swedish and international designers. A little something different, alright. 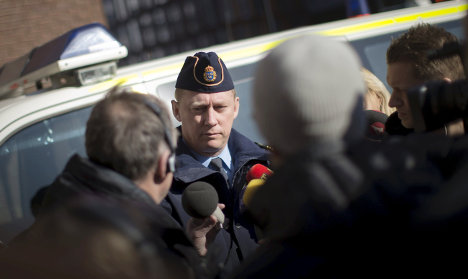 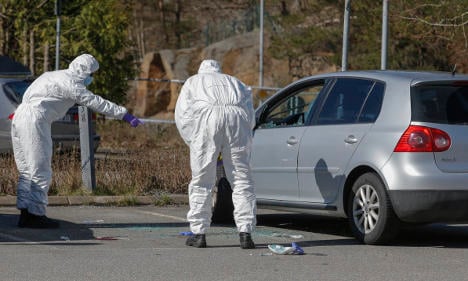 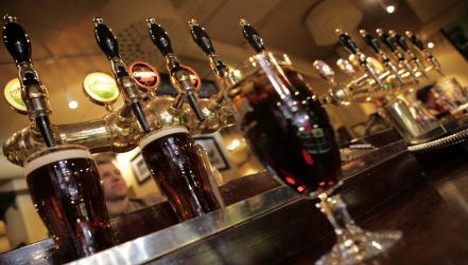 For Brits in particular, the pub life is something many still miss most of all about home. So from real ale specialists, to rowdy places full of football fans, here is a small selection of what Sweden’s largest city has to offer.

One of the best places to start is the oldest and best known of all is The Tudor Arms (www.tudorarms.com) – the grand old daddy of English pubs in Stockholm. It has become an institution in the city, since it first opened its doors in 1969 and is currently being managed by the second generation of the family.

In 2009, The Tudor won the Daily Telegraph “Best English Pub in the world” competition. The judges at the time said, “In our search for the best British pubs around the world, there were quite a few that appeared to be British, had British names, and so on. But often when you dug deeper, the Britishness was just skin-deep, a marketing tool to try to be fashionable or to attract tourists. Not so with this pub.”

What it does offer is good beer, good food, and just the kind of environment most British immigrants miss most about home. In short, it is a corner of England in our back yard, with, I am reliably informed, a steak and mushroom pie not to be missed.

The Tudor is by no means the only option though. In the heart of Stureplan, The Bull and Bear (http://www.bullandbear.se) has picked up a glowing reputation in recent years, not just for the beer but a convivial atmosphere offering a relief away from some of the painful wannabe bars in the glitziest part of town.

Stockholm’s British pubs are normally dark, cosy affairs, which is a blueprint followed by The Spitfire not far from Stureplan on Birger Jarlsgatan. It tends to be popular among the football watching brigade and has a real “locals” feeling about the place.

Another longstanding institution for foreign drinkers is The Dubliner (www.dubliner.se), which decamped from its roots in Central Östermalm to a new location by Sergelstorg a couple of years ago.

It is one of the best pubs in town beer-wise and pretty much unbeatable for watching sport. Throw in the live music and comedy and it is easy to see why it is as popular as ever.

Gamla Stan meanwhile has several options, one of the best being Wirströms (www.wirstromspub.se) Despite the name, this drinking hole has a cosy British Isles hole-in-the-wall kind of feeling exemplified by its cellar downstairs, which hosts live music and for the real experts, its own whiskey club.

Meanwhile The Liffey (www.theliffey.se), just down the road, has also become very popular among Brits, Irish and antipodeans based here, not least for the live comedy.

Södermalm naturally has its fair share of great pubs for expats from the UK or anyone looking for a taste of the British Isles. A personal favourite is the Oliver Twist (www.olivertwist.se), tucked away close to Götgatan, the main shopping street on the inner-city island.

Interestingly it was the first pub outside the UK, along with sister pub Akkurat, to receive Cask Marque accreditation, which, I am reliably informed, says a lot about the quality of the beer, while the food here is outstanding too.

Akkurat (www.akkurat.se) on Hornsgatan meanwhile, is justifiably widely known for its huge range of specialist beers and whiskies, not to mention its themed nights and special tastings.

Elsewhere on Södermalm, The Big Ben has worked hard to provide that “home away from home” atmosphere without feeling overdone, while The Bishop’s Arms (www.bishopsarms.com) on Bellmansgatan is part of a successful chain which first opened its doors in Västerås in 1993.

A nearby favourite on Hornsgatan is Black & Brown (http://www.blackandbrown.se/). While Swedish owned and run, the pub serves a range of food and beer that would tickle the taste-buds of even the most discerning “real” beer lover.

Further along Hornsgatan can be found The Southside (http://www.southsidepub.se/) which markets itself as an “Irish restaurant and entertainment pub” with all the sports, quiz nights and guitar-strumming crooners that the Stockholm exile could demand.

The Bishop’s Arms sister pub in Stockholm is on St Eriksgatan on Kungsholmen, with both offering a wide range of draught beers, and plenty of Belgian specialities.

To sum up, unless you import a group of friends or have been here long enough to be able to call somewhere your “local” then replicating the pub experience you miss so much at home will never be quite the same in Stockholm.

However, if all you miss is a good pint, and a British crowd in familiar feeling surroundings, the chances are you will have to walk less than a kilometre in any direction to quench your thirst both physically and spiritually. 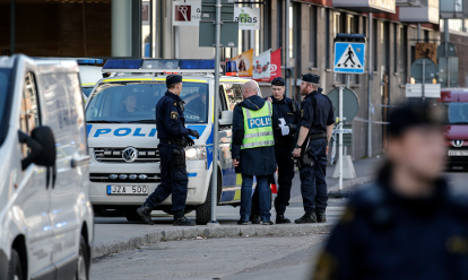 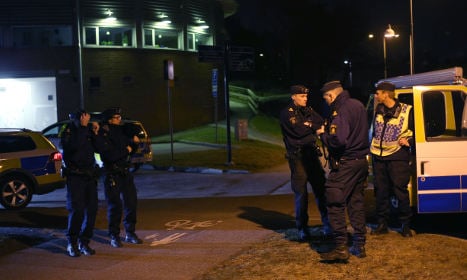