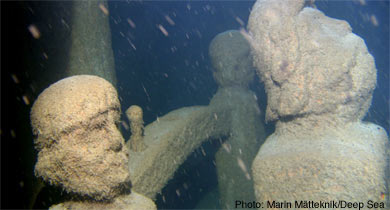 “The ship was located during the preparations for a television series, Vrakletarna (The Wreck Divers),” SVT said in a statement, adding that the ship was from the same period as the Vasa warship which sank after sailing just a mile into her maiden voyage on August 10, 1628.

That ship was discovered in 1956, and is today exhibited at the Vasa Museum, one of Stockholm’s main tourist attractions.

“Experts who have studied video of the ship conclude that it is possibly the best preserved ship ever seen from this period,” SVT said of the recently discovered wreck.

“The nationality of the ship is not clear, but it has features resembling Dutch ship building traditions,” added the broadcaster, which will begin screening its new series on Thursday evening.

SVT refused to divulge any further details about the find ahead of an announced press conference Thursday morning.

Due to its low temperatures and oxygen levels, the Baltic Sea is known as an ideal environment for conserving shipwrecks, which can remain virtually unblemished for hundreds and even thousands of year, according to SVT.