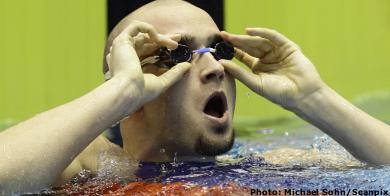 Four world and three European records were broken over the two days of competition.

“My aim is to continue to progress particularly with a view to the Olympic Games where I would love to win two gold medals,” said Nystrand, whose only medal to date was a silver at the 2006 European championships in Budapest.

Nystrand explained that because of his lack of previous success in competitions he drastically changed his lifestyle two years ago, going on a diet and increasing his training programme.

Spain’s Miguel Angel Jimenez won the UBS Hong Kong Open in a thrilling finish Sunday, firing a final round of 67 to push Sweden’s Robert Karlsson into a share of second place.

Jimenez emerged victorious after Karlsson made a disastrous double bogey on

the final hole which saw him finally surrender the lead in the $2.25 million tournament.

It capped a poor day for the Swede, who had led by four shots overnight.

He and Jimenez came to the 18th tied on 16 under par but a poor second shot was followed by a fluffed pitch that saw the ball roll back off the green to beside Karlsson’s feet.

Jimenez found the green with his approach but a bad first putt left him short and he missed his par attempt but bogey was good enough to secure the $370,000 first prize.

“The only thing is that I feel bad for Robert. He has played good all week.”

But despite throwing away a commanding advantage — he had also led the tournament since the second round — the 38-year-old Swede refused to be downhearted.

“I hit it close enough to the pins but when I hit good putts they didn’t go in,” the likeable Karlsson said.

“(At) the 18th we were right in between clubs and wanted to hit it really close. I got a really bad lie in the rough. I did what I could but I don’t know what I could have done differently. End of the day he beat me fair and square.”

Karlsson finished with a round of 72 to tie for second with South Korea’s Choi and Thailand’s Thongchai Jaidee, who fired a final round of 65 to climb up the field.

The event was played over the par 70 course at Hong Kong Golf Club.

Sweden’s footballers are licking their wounds after a catastrophic display in Saturday’s Euro 2008 qualifier in Madrid. The player returned to Stockholm on Sunday, where they have just a few short days to shake off their disappointment before Wednesday’s final Group F game against Latvia.

Fourteen months have passed since Kim Källström ensured that Sweden got their qualifying campaign off to the best possible start with a 1-0 win in Riga. While the Latvians will certainly be out for revenge, they have done little to show that they have enough resources to seriously trouble the Swedes. Lying fifth in the table, their unimpressive campaign included an ignominious 1-0 defeat to group minnows Liechtenstein.

But Sweden’s coach Lars Lagerbäck will know that his team must improve if they are to secure the point they need to be certain of playing at next summer’s tournament in Austria and Switzerland.