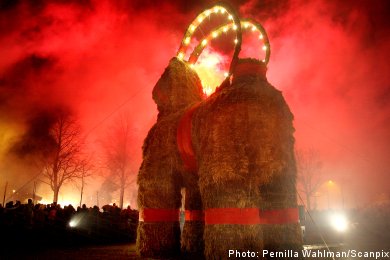 Last year, the Gävle Goat celebrated his fortieth birthday in style by managing to stay on his feet into the New Year. Thanks largely to industrial strength flame-proofing, the massive straw beast survived a diesel attack and several minor arson attempts before spending the rest of the year in satisfied storage.

On Sunday, a crowd of 5,000 assembled in the town centre to welcome the goat back and also possibly to look for chinks in his seeming impregnable armoury.

As a prominent member of the Goat Committee explained, it is the very same goat as last year – 13 metres tall and 7 metres long. But he is also 600 kilos (1,300 lbs) heavier.

“He has put on a bit of weight now that he has passed 40. He leads quite a sedentary lifestyle,” Anna Östman told The Local.

If the goat is not standing around waiting to be put on display, he is busy sitting down in front of his computer.

“Yes, the goat has started blogging this year,” said Östman.

The unofficial head of Sweden’s caprine community has had to suffer many indignities over the years. In all he has been successfully torched 22 times since Stig Gavlén decided in 1966 that Gävle needed a giant version of the traditional Yule goat to set the festive mood.

Two years ago a gingerbread man and a Santa Claus fired flaming arrows at the gigantic beast and brought him tumbling to the ground.

But this year, to save him from tears, he has once again been dressed in a flame repellent coating.

“There were some attempts made to burn him down last year. But they never did more than damage his paws,” said Anna Östman, who is confident that the Gävle Goat will survive the season unscathed for the second year running.