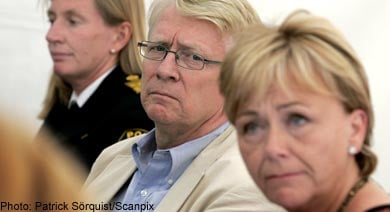 The government has decided that “it would be best for the organization if its work was led by a new Police Commissioner,” said Justice Minister Beatrice Ask in a statement on Friday lunchtime.

Strömberg will remain in his job until the end of the year, after which he will be given a senior role in the Justice Department.

The Commissioner’s resignation follows harsh criticism of him from the country’s regional police chiefs and disagreements with the government.

“The National Police Board’s repeated demands for us to deliver lacks any kind of encouragement or insight into how we work. The dry and inflexible message leads instead to sap us of will and motivation,” wrote Anders Westlund, Björn Engblom and Charlie Magné, chairmen of the organization representing senior police officers in Stockholm, Västra Götaland and Skåne.

Strömberg was summoned to meet Justice Minister Beatrice Ask on Friday. The two also met on Thursday, and Ask cancelled a trip to a ministerial meeting in Brussels in order to continue her discussion with the National Police Commissioner.

The meeting between Ask and Strömberg was called at Ask’s request. One subject up for discussion was the article in which the regional police chiefs expressed dissatisfaction with Strömberg.

The commissioner told SVT on Thursday evening that he and Ask “are speaking about the criticism in this article, but also how we can develop the police in the future and how the police can work to ensure that good methods are used that lead to better results.”

Asked whether Ask still had confidence in him, Strömberg said:

“We have spoken about these things and will talk about them tomorrow as well. This is what these conversations are about.”

Asked again whether he had Ask’s confidence, he said: “I believe we have a fairly similar view of what needs to be done in the Swedish police.”

Strömberg had called for more centralization of the Swedish police, with a “Swedish FBI” to fight organized crime. He admitted that there were differences between his view and that of the government in how the police should be structured.