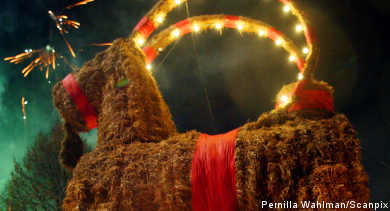 The larger goat survived Christmas weekend with its straw intact.

Every year since 1966, the town of Gävle’s Christmas preparations have included the construction of an enormous straw goat in a large town square. And almost every year since 1966 arsonists have taken pleasure in burning the goat to the ground.

Today, the 13 meter high Christmas decoration is treated with flame retardant to help defend it against attack.

However, the goat’s “Little Brother”, which is built by a high school science club, lacks the same protection.

Even so, Little Brother did survive long enough to be a part of Christmas Eve celebrations, a considerable improvement from last year when it met its fate on December 20th.