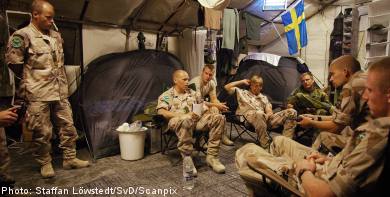 There are currently some 800 Swedish troops deployed in overseas operations. The government aims to have a standing force of at least 2,000 troops on foreign soil assisting in peacekeeping and other security operations.

The Nordic Battle Group currently includes some 2,300 Swedish men and women ready to be shipped to the world’s trouble spots at ten days notice from the EU.

While the troops will be on standby for the first six months of 2008, there are currently no indications that they will be sent into action anytime soon. Sweden will not take charge of its next EU battle group until 2011.

Nato is also reportedly keen to have Swedish troops at its disposal to fill out the ranks of its Nato Response Force (NRF).

“It would be a big bonus,” Nato general secretary Jaap de Hoop Scheffer, said when he visited Stockholm in November.

Nato has struggled to meet its target of 25,000 available troops for the NRF and the Swedish government is considering whether it is able to help.

The government could give its response at the next Nato summit meeting in Romania in April. Swedish foreign minister Carl Bildt gave his view on Wednesday of a Swedish participation in the NRF:

“It would depend on whether there was anything constructive that we could do, if we can make a constructive contribution. We would then consider it in view of other commitments.”