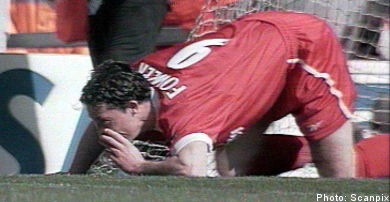 Nine years after Liverpool footballer Robbie Fowler famously responded to drug abuse allegations by sniffing the white line around the penalty area to celebrate a goal, a wild boar in western Sweden has replicated the feat.

But the symmetry-conscious animal did not stop at the penalty box. Dipping its snout to the lines of the pitch, the Fowleresque beast ploughed a lone furrow along all the markings of the Simlångsdalen surface, from the end lines to the centre circle.

“If you took a picture from above you would clearly see that it more or less followed the chalked lines of the pitch,” Halmstad council spokesman Kent Johansson told Hallandsposten.

Dismayed by Fowler’s actions, the English Football Association imposed a four-match ban on the player for bringing the game into disrepute, while Liverpool slapped him with a £60,000 fine.

But realizing that a boar was unlikely to be able to match the salary of a top footballer, Halmstad officials opted instead to erect an electric fence around the pitch.

“It has a 24-volt current and I can guarantee that any pig that gets a shock won’t try again,” said Johansson.

The council has so far failed in its attempts to explain why the animal stuck solely to the white lines.

“The most likely explanation seems to be that the boar was trying to get to the lime that is used when marking the pitch,” said Johansson.