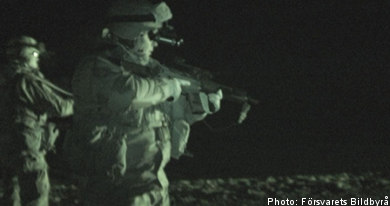 Shots were fired at two military jeeps attached to the NATO International Security Assistance Force (ISAF) as made their way eastwards towards their camp. The incident took place around 25 kilometres west of Mazar-i-Sharif on one of Afghanistan’s busiest roads.

The vehicle that was shot at contained two Swedish soldiers. They did not return fire.

“The shots struck the vehicle in such a way that it was put out of commission,” ISAF commander Torbjörn Larsson told TT.

The soldiers, aided by others in their unit and Afghan police, were able to seek refuge in a nearby house. Neither of the soldiers was injured in the attack.

One of the suspected attackers was arrested by Afghan police, while others in the group fled to the nearby mountains, said Larsson.

“It was most likely a criminal group that shot at the Swedish patrol,” said lieutenant general Anders Lindström in a statemement.

According to the commander, the attack could be connected to an arms and munitions find made by Swedish troops in the proximity of the ambush scene a week ago.

Speaking from Camp Nordic Lights, the base for Swedish and Finnish ISAF troops stationed in Mazar-i-Sharif, Larsson said the attack had not come as any major surprise.

“It seems to me that our procedures worked and I see no need to change them,” he said.