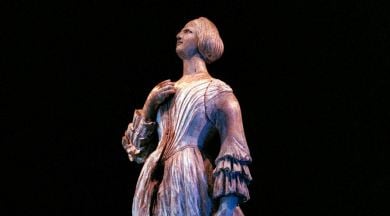 The figure, which depicts 19th century Swedish opera singer Jenny Lind, was discovered on a farm outside Gothenburg by local antiques dealer Karl-Eric Svärdskog, who went on to spend the next thirteen years of his life piecing together the piece’s history.

Svärdskog developed a thesis that despite having been found in Sweden, the statue was not from a Swedish ship at all. He eventually traced the figurehead to the American-built clipper Nightingale.

The figure had been expected to fetch up to $150,000, but was eventually sold for the reserve price. According to Dagens Nyheter, this may have been due to an article in the New York Times, in which a Massachussetts expert in ships’ figureheads, Ryan Cooper, dismissed the theory that the Jenny Lind was American, saying it was most likely Scandinavian.

Svärdskog expressed disappointment, not with the price, but with the fact that his lifetime’s work had been called into question, according to Dagens Nyheter. He also insisted that his version of the figure’s history was accurate, and points to the fact that it was made of New England white pine as evidence that it was not of Swedish origin.

Nancy Druckerman, folk art specialist at Sotheby’s told the New York Times the auction house had “a very strong comfort level in terms of the authenticity of the piece.”