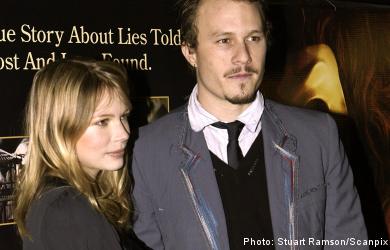 US entertainment website TMZ reports Williams saying she is “devastated” by the news of Ledger’s death, which initial reports are attributing to a drug overdose.

The website reported that the actress, who met Ledger on the set of Brokeback Mountain, was heading back to New York. She is in Sweden to work on Lukas Moodysson’s film Mammut, in which she has a leading role. A person in Trollhättan close to Williams told Swedish tabloid Expressen that “we cannot say when she will go.”

Mammut producer Lars Jönsson told tabloid Aftonbladet on Wednesday that the film’s crew was “in shock.”

The Swedish leg of filming for Mammut was finished when news of Ledger’s death arrived. Jönsson could not say on Wednesday how the news would affect the next leg of filming, due to take place in February in New York.

“The only thing I am thinking about is how sad this is for Michelle and their daughter,” he told the paper.