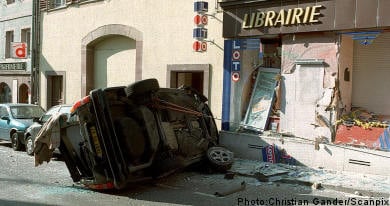 Prosecutors had argued that a faulty braking system on the Volvo 850 TDI vehicle was the “indirect” but “certain” cause of the crash, in which a French teacher ran over two young children on their way to school.

The driver, 57-year-old Catherine Kohtz, was handed a six-month suspended prison sentence and a €300 fine, as well as having her licence temporarily revoked, for failure to control her vehicle.

“I feel a bit numb, but the most important thing is that Volvo has been convicted,” Kohtz said after the verdict.

“All our efforts during seven years of procedure have been crowned with success,” added her lawyer Thierry Kahn.

“Everything we said during the trial has been acknowledged by the court, i.e. that the Volvo’s brakes were not working.”

Prosecutors had called for a €150,000 “dissuasive” fine against the car maker, which was found guilty of involuntary homicide and causing involuntary injury.

Volvo Cars spokesman in Sweden, Olle Axelson, said the company was still looking at the details of the verdict.

“This is a tragic incident for everyone involved,” Axelson, while insisting that faulty brakes were not to blame.

“There was no problem with the brakes,” he said.

The accident occurred on June 17th, 1999, in the eastern French town of Wasselonne, killing two children aged 9 and 10 and leaving a third seriously injured.

Kohtz — who prosecutors described as the “last link in the chain” of events that caused the crash — insisted during the trial she did everything to avoid it, saying her car brakes had stopped responding.

Volvo’s lawyers denied any fault with the vehicle, suggesting the driver may have confused the accelerator and brake pedals in a moment of panic.

But the court ruled that Volvo “was perfectly aware that the braking system on this type of vehicle was not perfect since it made minor modifications to it on several occasions.”

It argued that the repeated changes showed “the manufacturer’s inability to provide an appropriate technical response.”

The prosecution had dropped charges during the trial against the car maker’s French subsidiary Volvo France, now part of Ford, and the dealership that sold the car.