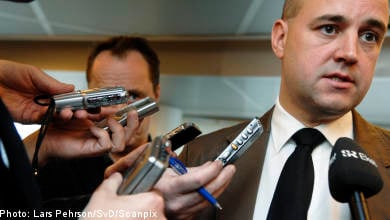 Having looked analyzed all the candidates’ policy platforms, Reinfeldt said he felt most affinity with the views of the Chicago senator.

“It’s hard to oppose one’s own politics,” Reinfeldt told reporters at the Riksdag on Tuesday.

The Prime Minister noted that Obama’s ‘Making work pay’ programme was very similar to the tax breaks for workers introduced by his own centre-right government, with low-income earners standing to benefit most.

“He is particularly close to the Moderates in the areas of economic and climate policy,” said Reinfeldt.

But he was also critical of the more protectionist trade stance favoured by both Obama and Hillary Clinton.

Reinfeldt said he shared John McCain’s free trade line but was less impressed by the Republican candidate’s plans for tax cuts and a swelling of the defence budget. Any increase in the US budget deficit would have a negative impact on the Swedish economy, he said.