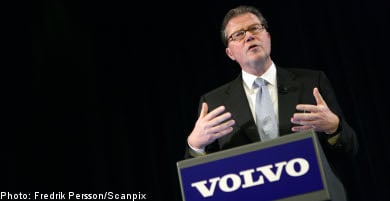 For the full-year, Volvo’s net profit fell eight percent to 15.02 billion kronor but the company noted that the comparative figure in 2006 had been inflated by a tax refund.

By geographic zone, sales rose 20 percent in western Europe, its main market, and 72 percent in Eastern Europe. The Swedish company sells products under the Volvo, Renault and Mack brands in Europe.

Sales doubled in Asia but plunged 23 percent in North America.

The weakness on the North American market was due to a sales frenzy in 2006 ahead of new US environmental standards for trucks sold as of 2007.

Chief executive Leif Johansson said however a recovery was in sight in the United States and Canada.

“North America is not declining anymore. It will take a while (but) over time we expect North America to start to come back,” he told reporters, adding that 2008 would be “quite reasonable.”

“The Volvo group concluded an intense 2007 with a fourth quarter in which sales and operating income reached record levels,” Johansson said.

“During the year, we carried out several major acquisitions, established a strong presence in Asia, advanced our positions in important product segments, launched many new products and managed widely shifting demand trends in our main markets,” he said.

“Following the acquisitions of Nissan Diesel, Lingong and Ingersoll Rand’s road development division, we now have a significant industrial structure in Asia, with a presence in Japan, China and, when the expected cooperation with Eicher Motors is in operation, also in India,” he said.

“These are rapidly growing markets and we want to be part of that growth,” he added.

Volvo forecast a five to 10 percent rise in the European truck market from 2007, while demand in North America was expected to remain unchanged.