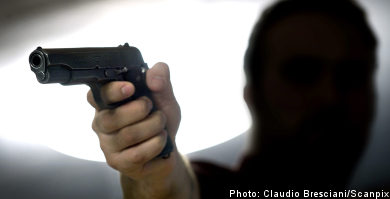 A case involving four men accused of smuggling 40 pistols in their car over the Öresund bridge in October 2007 reached its conclusion in Malmö this week. The verdict is expected to be delivered during next week.

Rolf Bårdskär at the customs and excise criminal investigation unit (Tullkriminalen) in Malmö described the case as “exceptional.”

“During the 2000s we have witnessed an increasing trend regarding seizures. Smuggling is primarily conducted by gangs that in my experience are well established within the EU. I am totally convinced that that there are more illegal weapons in Sweden today than a few years ago,” Bårdskär said to Svenska Dagbladet.

Many of the weapons come into Sweden from the former Yugoslavia as there are still a large number of weapons in circulation there since the war.

The Swedish National Police (Rikskriminalpolisen) have noted that criminals are keener to arm themselves when committing offences such as bank robberies, and when in conflict with other gangs. This development is behind the increase in reports of gun crime and possession of illegal weapons, Police believe.

21 attempts to smuggle firearms over the Öresund bridge were discovered in 2007 alone. Customs and excise made double the number of seizures in 2007 as in 2004. A new law, passed in 2006 has given border police the right to search suspicious vehicles.

“This has made it easier to seize weapons,” according to Fredrik Bornesand, head of the Nova-group within Stockholm police, talking to Svenska Dagbladet.