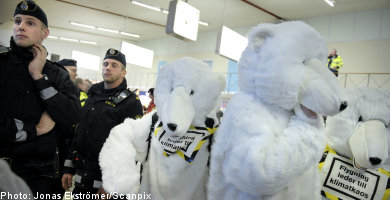 The ursine environmentalists popped up at the airport shortly before 4pm.

“There are about twenty people dressed as polar bears walking around the terminal with flyers,” said Niclas Härenstan, spokesman for the Swedish Civil Aviation Authority (LFV) told news agency TT.

The flyers distributed by the bears bore the message: “Flying leads to climate chaos”. Many of the bears lay spreadeagled on the floor feigning death as bemused travellers looked on with interest.

While the authority does not normally allow political demonstrations at its airports, Härenstam said they they would not attempt to halt the bear invasion.

“We’re not going to send security guards after them or anything like that. We’ll just wait and I suppose they’ll move away in the end.”

The march of the polar bears was not entirely unexpected. Swedish police were on alert around the country’s airports on Friday after receiving a tip-off that environmental activists were planning some sort of action.

He would not say which airports might be targeted or what kind of a threat existed.

“We know there is a threat and we take it seriously,” Gyllander added.

Officials at Stockholm, Gothenborg and Umeå airports confirmed they had been warned by the police, but would not say if security had been tightened.