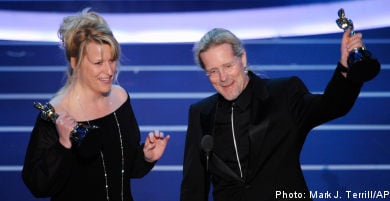 He shared the award for his efforts on the Matt Damon thriller with his Soundelux colleague Karen Baker Landers.

Hallberg previously took home an Oscar in 1996 for his work on the Mel Gibson epic ‘Braveheart.’

The Best Picture award went to ‘No Country for Old Men’ by the brothers Joel and Ethan Coen, who also picked up the Oscar for Best Director.

Daniel Day-Lewis received the Oscar for Best Actor for ‘There Will Be Blood,’ and Marion Cotillard took home Best Actress honors for her portrayal of Edith Piaf in ‘La Vie En Rose.’