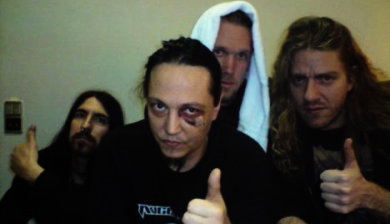 Still smarting from the vicious attack, which left three members needing treatment, the band hooked up with a new driver in Frankfurt before embarking on a 200 kilometre journey to Bamberg.

But just twenty minutes before they were due to arrive in the Bavarian town on Tuesday, a police patrol unit requested the driver to pull over.

“They took a piss test from the driver by the autobahn. He still had some beer in his blood,” singer Peter Tägtgren told The Local on the phone from Vienna.

The band members were ordered off the bus and asked to line up at the side of the road.

Writing on their tour blog, the band said they were individually searched, asked to remove their shoes and socks and had all their bags turned inside out.

When the police finally emerged from searching the bus, they had with them a bag containing a quantity of white powder.

The bag belonged to the new driver, whose prospects seemed bleak as he was driven to a police station 80 kilometres away.

Now driverless, the band opened some cold tinned food and a bottle of tepid wine and huddled round to watch A Nightmare on Elm Street on a laptop with the rain beating down on the top of the bus.

But just as it looked like things couldn’t get much worse, Pain found they were back in business.

“The driver’s blood sample was below the limit and there were no drugs in the bag,” said Tägtgren.

Seven hours after they had taken him away, police dropped the driver back to the bus and the Swedes were able to continue their successful tour as support act for Finnish symphonic metal band Nightwish.