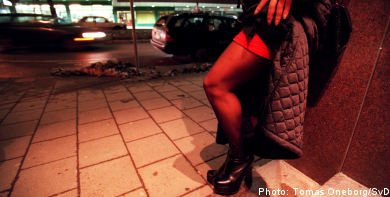 The man is reported to be a senior manager in the civil service and a respected member of the sports movement in Sundsvall, the town in northern Sweden where he lives.

Police arrested the man in a room at the Sheraton hotel in Stockholm in January. The man made contact with the Russian prostitute, who is known as Irina, in the bar of the hotel under the watchful eye of plainclothes police.

The police had been called to the hotel by security staff who had witnessed several Russian prostitutes at work on the premises.

The Sundsvall civil servant and the prostitute had stripped naked and $300 had changed hands when the police knocked on the door, writes Sundsvalls Tidning.

The man has been served with a fine by the prosecutor and been ordered to pay 13,200 kronor ($2,200) for the attempted purchase of sexual services.

The man is reported to be highly respected in his department which has its head office in Sundsvall. The man travels to Stockholm regularly with work. He did not claim expenses for travel for the night in question.

The civil servant was reported to be very remorseful over his actions and had this to say to Sundsvall Tidning:

“I admit that I have made a mistake. I am extremely regretful.”

The man did not however inform his superiors in the civil service however, describing the events as “private matter.”