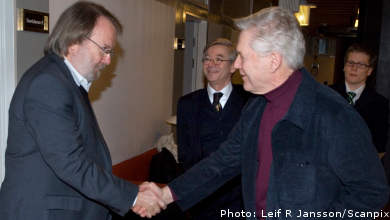 “We’re happy that we’ve reached an agreement and can move forward as friends,” said the trio in a joint statement.

A new hearing, due to begin in the Stockholm Court of Appeals starting on Wednesday, has been cancelled.

Seth’s lawyer Staffan Michelson did not comment on the economic details which led to the agreement. Nor did he comment on whether Seth is dropping all future demands for a share of the musical’s royalties.

“But the settlement means that his reputation as a dramatist is completely reaffirmed,” said Michelson to news agency TT.

He added that Seth’s importance to ‘Kristina’, as the musical is know in English, will be made clear in future productions.

The question of Seth’s role was central to the dispute when the case was heard by the Stockholm District court a year ago.

Following the ruling, Ulvaeus and Andersson explained that no future stage productions of the musical would take place if Seth were declared the script’s copyright holder.

The two ex-Abba stars maintain that the script ultimately used for productions in Malmö, Gothenburg, and Stockholm was written by director Lars Rudolfsson and dramatist Jan Mark.

It now appears as if the question has been settled.

“Now all the prerequisites are in place for the musical to continue being seen around the world, but where that will happen, I can’t say,” said Michelson.

The Stockholm District Court’s ruling supported Ulvaeus and Anderssson in the dispute, finding that the musical was based on the script by Rudolfsson and Mark and that it was considered an independent work under existing copyright law.

Seth therefore had no copyright claims to ‘Kristina’ according to the judgment, and the other two copyright holders didn’t need his consent to produce the musical again.

The parties have now submitted a joint petition to the Court of Appeals requesting that annul the lower court’s ruling.

‘Kristina’ tells the story of a poverty-stricken Swedish family and their migration to American in the nineteenth century. The musical received a rapturous reception in Sweden, and was seen by over a million people, compared with 847,000 who saw the Swedish version of the Abba stars’ international success ‘Mamma Mia’.