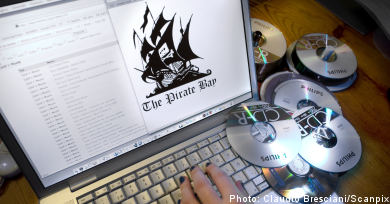 Internet service providers were quick to welcome the move, while the Pirate Party and The Pirate Bay were scathing in their criticism.

“This is a declaration of war on an entire generation of young voters,” said Pirate Party leader Rickard Falkvinge in a statement.

Falkvinge characterized as “shameful” the government’s decision to renege on its promise not to start hunting young people “on behalf of the American movie and music industries.”

Rather than “dismantling the rule of law”, the government should recognize file sharing as “a techno-historical fact”, he said.

Writing in the opinion pages of newspaper Svenska Dagbladet, Minister of Justice Beatrice Ask and Minister of Culture Lena Adelsohn Liljeroth said the government was now united in how to approach the issue.

Those who own the rights to illegally shared content must be able to prove that an internet service subscription has been used for infringement, the ministers pointed out.

The Centre Party, one of four parties in the centre-right coalition government, reluctantly agreed to compromise on the issue despite having certain reservations.

“It’s not possible to get things 100 percent your own way in negotiations. It was with a degree of regret that we agreed to go along with this,” spokeswoman Annie Johansson told Svenska Dagbladet.

The party had previously said it would not support any policy that entailed releasing IP addresses to the courts.

Speaking to Svenska Dagbladet, The Pirate Bay’s Peter Sunde described the move as “completely the wrong way to go and an affront to personal integrity”.

With the new proposal, the government is effectively rejecting an alternative proposal put forward in a report by appeals court judge Cecilia Renfors. which called for ISPs to shut down subscribers who repeatedly downloaded films and music without permission.

“It is good that the government has reached a decision on this issue and it is good that they have clearly distanced themselves from the Renfors inquiry, which would have put us providers in a position of having to police our own customers,” said Bredbandsbolaget’s CEO Marcus Nylén in a statement.

These sentiments were echoed by Martin Tivéus, head of internet service provider Glocalnet.

“It is important that the new copyright laws will take into account users’ rightful interest in their own personal integrity,” he said. ”

Neither we as a provider nor the Anti-Piracy Agency can or should make a decision as to when copyright is more important than personal integrity. For this reason it feels good that the government will hand this task to the courts.”