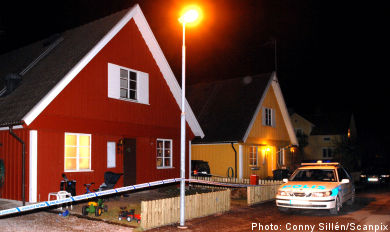 The children’s 28-year-old father has been arrested on suspicion of murder and attempted murder.

A 23-year-old woman and her two children were taken to hospital on Monday evening with serious stab wounds, said local police in Västmanland in a statement.

Both children later died from their injuries. Their mother has been transferred from Örebro to Uppsala University Hospital. Her injuries are reported to be serious.

A male acquaintance, reported by several local media to be the woman’s boyfriend, found the woman and her two children at the house in Arboga, 150 kilometres west of Stockholm. He alerted the police, who arrived at the scene shortly after 7.30pm.

The man who found the mother and her two children was taken in for questioning but was not suspected of committing an offence.

Several hours after the attack, the father of the two children was arrested in Motala, a town located 140 kilometres south of Arboga.

“He has been detained and is strongly suspected of two cases of murder and one case of attempted murder,” said Strömberg.

Police are now looking for witnesses who may have sen anything unusual near the house in Arboga.

“We want to get information from anyone who may have seen a man in this area during the evening so we can tie him to the location. We are also very interested in talking to anyone who may have observed a car travelling from Arboga to Motala,” said Strömberg.

CRIME
Suspect’s friend: ‘There was no baby’