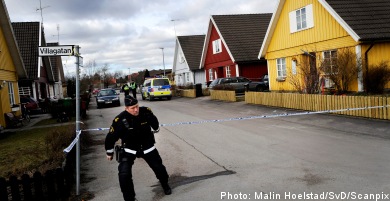 The public prosecutor dropped the arrest warrant at 4.15pm on Wednesday afternoon.

At a quarter past four defence attorney Kari Skönebrant learned that his client would be freed.

“He’s been in a state of shock the entire time he’s been held. First he learned that his children had been murdered and then he found out he was a suspect. He’s been subjected to an extreme trauma,” said Skönebrant to news agency TT.

“A person who has been dragged into something like this and hasn’t even had a chance to mourn the loss of his children. He needs some distance from everything that’s taken place.”

Throughout the investigation, suspicions around the 28-year-old have weakened.

He was arrested on probable cause, but during the day Tuesday suspicions dropped to “reasonable”.

After three hours of questioning on Wednesday he was released.

“There wasn’t sufficient cause to continue holding him under arrest and it never would have been enough to remand him to custody,” said Jan Sjöberg of the Västmanland police department.

Sjöberg added that the 28-year-old man hasn’t been completely cleared in the case and that his alibi was one of the reasons he was released.

He wouldn’t comment as to whether there were any other suspects in the case.

The mother and her two children were found in a house in Arboga with stab wounds on Monday night. The children, ages 1 and 3, later died from their injuries.

Police have said they are open to the possibility that someone other than the father was involved with the killings.

A large number of the parents’ friends and acquaintances were also questioned on Wednesday.

CRIME
Suspect’s friend: ‘There was no baby’