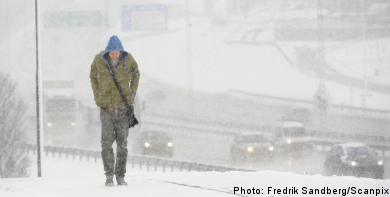 Heavy snow is expected to roll in from the west, bringing with it a risk for high winds.

“It’s going to be some dramatic weather that makes you want to stay at home,” said Anna Österman of Sweden’s meteorological agency SMHI.

SMHI has put out low-level warnings for high winds, icy conditions, and snow for an area bound by the Skagerrak straits of Sweden’s west coast and Värmland county, just to the north in western Sweden.

For Skåne and Halland counties in the far south of Sweden, SMHI predicts difficult weather will persist throughout Good Friday and into Easter Saturday.

“We’ll have to wait and see whether Skåne ends up getting snow or rain,” said Österman.

In the eastern sections of southern Sweden the weather is expected to be calmer, drier, and generally cloudy.

Easter weekend should bring generally nice but chilly weather to northern Sweden, according to Österman. Clear nights may cause temperatures to dip down close to 25 degrees below zero, with the days being partly cloudy with a slight chance of sun.

“Conditions will be about the same for the entire Easter weekend in Norrland. On Saturday there may be a chance of some light snowfall,” she said.