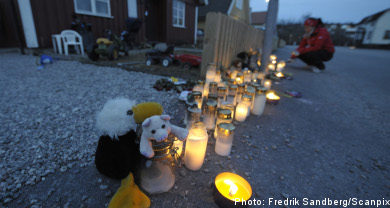 Doctors at Uppsala University Hospital believe that the 23-year-old, who was seriously wounded in the attack, has a good chance of making a full recovery.

“But she may not wake up until the weekend,” the woman’s father told news agency TT.

Doctors reduced the amount of sedatives prescribed to the woman following an x-ray examination on Wednesday.

The woman has been kept under heavy sedation while being treated for head wounds following the stabbing incident on March 17th that resulted in the deaths of her one-year-old daughter and three-year-old son.

Two Swedish police officers meanwhile are set to travel to Germany to take part in the investigation of a 31-year-old woman suspected of the murder of the two children and the attempted murder of their murder.

“I’m going to call them now and tell them they’re welcome. I don’t know if they’ll be arriving as early as today. When the woman is being questioned they will of course be included,” said Thomas Klinge from the German prosecutor’s office.

Swedish police have formally requested the results of a DNA test given by the suspect after a warrant had been put out for her arrest and she turned herself over to police in Germany last week.

The woman, a foreign national with an address in Stockholm, was released from custody on Saturday night but has given assurances that she will make herself available for questioning by Swedish police.