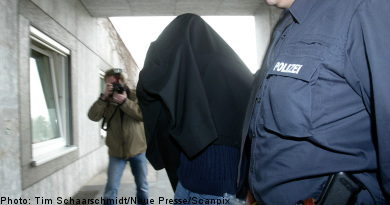 Tanja Brettschneider said she was unclear as to why an analysis of her client’s DNA was not expected to be ready until early next week.

“Swedish police have taken an awfully long time to prepare an analysis of the DNA sample. That’s bad. It is very unusual here in Germany for a DNA result to take as long as this and we have not been presented with an analysis yet,” she told news agency TT.

Sweden’s Court of Appeal ruled on Tuesday not to remove the warrant for her arrest that led to German police taking the 31-year-old German woman into custody in Hanover.

“It is probable that she was in Arboga on the day of the murder,” said police spokesman Börje Strömberg, who pointed to evidence from security cameras at the town’s train station.

She is also believed to have used her telephone in Arboga on the day of the murders, according to an unconfirmed report in the Hannoversche Allgemeine newspaper.

The 31-year-old has refused to speak to two Swedish police officers who have travelled to Germany to question the suspect.

Two children, 1 and 3, and their 23-year-old mother were found with serious stab wounds at their home in Arboga in central Sweden on March 17th. The children later died from their injuries.