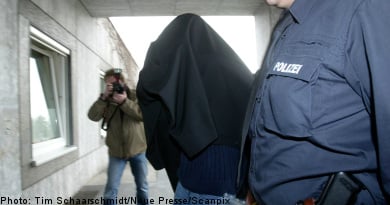 Police in Västmanland county have confirmed in a statement that they seized an object at Skavsta airport in Nyköping, south of Stockholm, which they believe could be the murder weapon.

“It’s a hammer-like object. I haven’t seen it myself but I have heard it is a hammer,” chief prosecutor Anders Jakobsson told the TT news agency.

Police believe the German woman who is the prime suspect in the case flew to Bremen from the airport on March 18th, the day after the murder.

In the statement police explain that the suspicions surrounding the German woman have increased in recent days. She has told German police that she was in Arboga at the time of the murder, which was also confirmed by tracing her mobile telephone.

The Swedish police officers who are now in Germany have not yet had an opportunity to question the woman, who has said she doesn’t want to talk to police.

Meanwhile, DNA-tests taken from the suspect are now complete, according to German prosecutors.

“Now we are waiting for them to be compared with the results of Swedish DNA-tests,” said Thomas Klinge of the German prosecutorial authority to the newspaper Expressen.

The tests were taken when the 31-year-old German woman was arrested in Hannover on the Thursday before Easter.

The woman was later released because the suspicions against her were too weak.

But over the weekend she was re-arrested in Germany after a new warrant was issued by Swedish authorities on Saturday which included a stronger degree of suspicion.

Yesterday the Stockholm Court of Appeals denied the 31-year-old’s request to appeal the warrant .

The woman had earlier had a relationship with the live-in boyfriend of the 23-year-old mother whose children were murdered.

The mother remains under observation at Uppsala University Hospital.