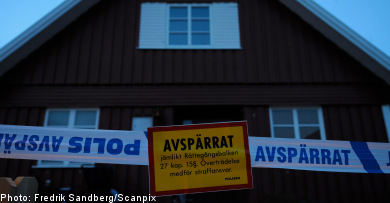 Evidence collected from the 31-year-old German woman’s fingernails has now been sent for DNA-testing.

“We hope to get the results of the analysis in a few days,” said Thomas Klinge, prosecutor and spokesperson from the Hannover prosecutor’s office.

The woman had the underside of her nails scraped three days after the murders. The scraping occurred in connection with her arrest by German police.

Investigators hope that the evidence–which could consist of skin, blood, or fibres–can connect the woman to the scene of the crime.

The material from the scrapings will take a longer time to analyze than the sample of saliva taken from the woman on the same occasion.

Today police questioned two friends who they believe the 31-year-old contacted in connection with the Arboga murders. Swedish police participated in the questioning, which took place in Hamburg.

“We want to know of this information can be of value in the murder investigation. We want to check what she told them and if she might have left some of pieces of clothing with them,” said Klinge.

The hammer which was seized at the security check point at Skavsta Airport when the woman departed for Germany is now being examined by forensic specialists.

“We are looking to see if there is any DNA on it and if the hammer matches wounds on the murder victims and the woman on whose life an attempt was made,” said Börje Strömberg, spokesperson for the Västmanland police.

The injured mother of the two murdered children has not yet been interviewed.

“We visit her now and then to see if its possible to speak with her,” said Strömberg.

It was on the evening of March 17th when the children and their mother were attacked in their home in Arboga. The children died of their injuries and the mother was taken with life-threatening injuries to hospital where she remains under observation.

The 31-year-old woman suspected in the case had earlier had a romantic relationship with the live-in boyfriend of the now injured woman.