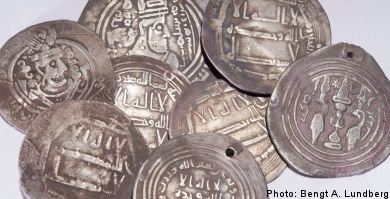 On Tuesday, archaeologists from the Swedish National Heritage Board dug up the largest collection of Viking-era silver coins found in the Uppland region north of Stockholm in modern times.

The treasure consists of 450 silver coins and was discovered during an investigation of an Iron Age grave site located beside the Steningehöjden area in Sundveda near Arlanda.

Some of the coins come from Baghdad and Damascus and are thought to be from 500 to 840 AD and appear to have been buried around 850 AD. They were found on the edge of a grave which is believed to be 1,000 years older than the treasure.

“This shows that the people who lived at the site had distant contacts,” said archaeologist Karin Beckman-Thoor, who witnessed the find.

Click here to view more photos from the Viking treasure find in The Local’s Gallery section.