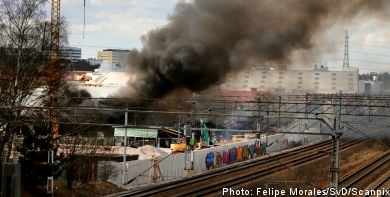 All train traffic passing Sollentuna station was suspended on Saturday due to the risk of explosion as a major fire broke out in a garage in the centre of the town in the outskirts of Stockholm.

The decision to suspend train services through Sollentuna station was taken as the premises was found to contain gas canisters and was therefore at risk of exploding.

Fire services had managed to gain control of the fire by Saturday evening and work to extinguish the fire continued into Sunday morning. Disruptions to train services are expect to continue until around 3pm on Sunday afternoon.

“There are still some embers that have to be doused in water. We also don’t know if the gas canisters in the building have exploded,” said Lars Carlsson of the fire department on Sunday morning.

The cause of the fire remains unknown.

Before train services can resume on Sunday the National Rail Administration (Bankverket) will inspect Sollentuna station and tracks in the vicinity.

“This inspection goes quite quickly, however,” said Jonas Bengtsson at the authority to news agency TT.

According information available to the authority there have been no casualties reported as a result of the fire.