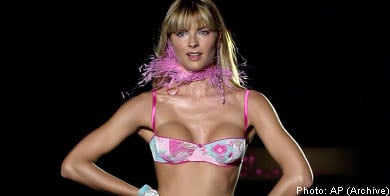 “Too tight a bra can lead to breasts that sink,” said Professor Göran Samsioe to The Local.

Professor Samsioe, an adjust at Lund’s Department of Obstetrics and Gynaecology explained that the body’s “everyday, natural, movements” stimulate the development of elastic tissue beneath the skin responsible for supporting breasts.

“If natural movement is restricted by a bra that is too tight, it can affect the growth of these tissues,” he said.

Samsioe cites a French study on women ages 18 to 25 which found that the distance between a woman’s nipples and the ground decreased in women who wore bras.

“Bras caused nipple height to sink slightly,” he said, going on to explain that the women in the study who wore bras ended up with breasts that hung a bit lower than women who went without bras.

Local girls discussing their first bra purchases with the Sydsvenksan newspaper didn’t dispute the professor’s warnings, but explained that sometimes other factors come into play when considering whether or not to start wearing a bra.

“I remember that I really thought I needed a bra, despite having small breasts,” 18-year-old Sarah Nielsen told the paper.

“It was bumpy and uncomfortable when simply going down the stairs, and I, a horse girl, absolutely needed something around my breasts when I was riding,” she said.

Samsioe stressed that girls and young women with growing breasts are at the greatest risk of experiencing negative side effects from wearing too tight a bra.

He added, however, that girls with unusually large busts shouldn’t shy away from bras, as large breasts can also damage the elastic tissues which serve as the breasts natural support mechanism.

“If you feel uncomfortable without a bra, you should use one, as long as it allows your breasts to move in a natural way,” said Samsioe.

The professor is concerned that young girls looking to purchase “highly supportive” bras are falling prey to societal pressures driven by the commercial interests of clothing manufacturers, pointing out that bras have only been around for about 100 years.

“Western culture has come to believe the breast is some sort of sex organ,” he said.

“We’re made to believe that we all need to have a bra, but there is no medical reason for them and in some cases it can even be harmful.”

Samsioe acknowledges, however, that all the fuss over breasts and bras has more to do with looks than with health.

“There is no medical importance as to what your breasts look like,” he said.