FI investigated whether MAN should have to launch a bid due following its acquisition of shares in Scania, since Volkswagen AG – which increased its shareholding in Scania at the same time – owns part of MAN.

“FI has found existing circumstances supporting that MAN and Volkswagen are acting in concert with each other in the eyes of the law, and that MAN, through its share acquisitions, could therefore actually be obliged to launch a bid,” FI said.

“FI has ruled, however, that it is VW, as the largest owner in Scania, in such a case that should fulfill the obligation to launch a bid,” FI said.

However, it said that VW has been granted an exemption by the Swedish Securities Council (Aktiemarknadsnamnden) which means that it is not required to make any bid on the remaining shares in Scania.

“This exemption has not been appealed and FI therefore has no means to retry the matter. There are subsequently no grounds for FI to intervene in this matter,” it said.

VW in early March reached a deal with Scania’s major shareholders, the Wallenberg Foundations and Wallenberg-controlled Investor AG, to acquire their latter’s shares in the Swedish truckmaker, resulting in VW becoming the majority shareholder in Scania. 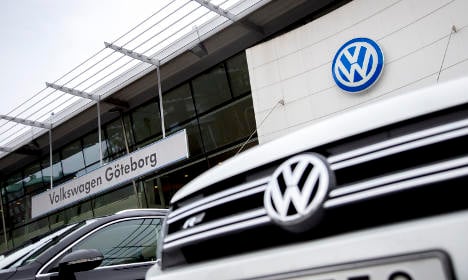 “We believe this action, or lack of action, from the management is outrageous. It's poor judgment in terms of business, but it's also very costly from a financial point of view,” Sasja Beslik, head of responsible investments at Stockholm-based Nordea, told the AFP newswire.

The announcement came after Volkswagen (VW) group admitted on Thursday that it had manipulated emissions tests of its cars in Europe.
Earlier in the week its CEO stepped down following a scandal over tests in the USA.
It was not immediately clear how many cars in Scandinavia might have been affected by the scandal.
READ ALSO: Just how important are cars to the Germans?
German Transport Minister Alexander Dobrindt told reporters in Berlin on Thursday that government investigators sent to investigate at VW's headquarters had received the latest admission from company officials.

He said that officials would “carry on working intensively to find out exactly, together with VW, in detail which vehicles are affected so that we can further inform the public.”

Dobrindt said that most of the vehicles involved in the manipulation had 1.6 or 2-litre diesel engines.

VW is “working on” a list of the affected models, but “can't yet say when it will be published,” a spokesperson for the car firm told German tabloid Bild.

The EA 189 motors involved in the emissions scandal are also found in Audi's A1, A3, A4 and A6 cars, an Audi spokesperson also confirmed to the tabloid.

Dobrindt did not say whether the vehicles affected would have to be removed from circulation.

But he added that cars from other manufacturers would now be tested to see if the problem is more widespread.

Nordea is one of the biggest banks in Scandinavia with 11 million customers.

It has made a point of promoting an ethical business strategy in recent months following a scandal which linked its CEO with free hunting trips earlier this year.