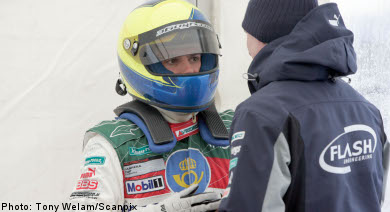 “This is great fun. I have always had an interest in cars, and to drive a racing car on a racetrack is a dream I have had since I was a little boy.”

Media interest was huge as the only son of the Swedish king took his Porsche out for a test drive in the rain on the Gelleråsen track. The Porsche Carrerra Cup is set to hold the interest of the media this year thanks to its royal participant. 31 cars are registered to start the cup’s first race in Knutstorp in southern Sweden on April 19th.

The prince emerged onto the track after a light snow fall at 11.46am on Saturday morning behind the wheel of Tony Rickardsson’s old car. Swedish speedway king Rickardsson came third in last year’s Porsche Carrerra Cup and recently grabbed the headlines for his twists and turns in an entirely different arena, the dance floor. Rickardsson, runner up in TV4’s Let’s Dance competition had this to say to the assembled media of Carl Philip’s day’s driving:

“He drives really well. I was just behind him for a couple of laps and he held a perfect line. I am really impressed.”

The prince is driving with the number 13 on his car, a Porsche Carrerra with a 400 horse power engine and top speed of 270 kilometres per hour.

When the testing day was over Carl Phillip had the 15th best time overall of the 23 drivers participating at Gelleråsen. The prince’s ambitions for his competitive debut in Knutstorp are modest however.

“To get to the finish,” the prince replied to the assembled media.

The Porsche Carrerra Cup opens in Knutstorp on the weekend of April 19th-20th. Further race weekends will take place at Mantorp, Karlskoga, Gothenburg, Sturup, Falkenberg and in Våler in Norway before concluding back at Mantorp on the 27th-28th September.