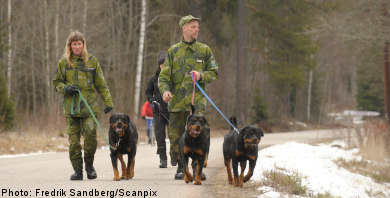 That the man is to be interrogated again on Sunday afternoon at around 4pm indicates that new information has emerged.

The 42-year-old’s state appointed lawyer Leif Silbersky confirmed to news agency TT that he is aware of the reasons for the new interrogations planned for his client but he was unwilling to be more specific.

“I want the police and prosecutors to be allowed to work in peace so that they can pose their questions.”

The 42-year-old continues to deny all charges.

Meanwhile the search for Engla Höglund continues with members of the National Home Guard, police, and volunteers searching the area around the small rural community of Stjärnsund.

The search is continuing in areas where witnesses have made observations of interest to the police. Suspicious cars and people are among the so-called hot spots that are being looked at more closely.

Police officers are continuing to conduct interviews with witnesses that have reported information of interest. Over 1,000 tips have come in and the flow of information continues on Sunday.

The man was remanded in custody on Friday and he is now held on probable cause of kidnapping. The suspicions against the man were strengthened on Thursday evening after further interviews.

Police have witnesses who claim to have seen the man near where 10-year-old Engla was last seen in Stjärnsund to a greater extent than the man is willing to admit.

They claim that he stopped his vehicle there on Saturday, the same day that the girl disappeared.

As it has now gone over a week since Engla’s disappearance police do not believe that she can be alive if she has been outside.

“In the circumstances it is hardly likely that she is alive. But we should always keep open the possibility that she is,” said Mats Nygårds.

During questioning the man was also notified that he is suspected on charges of child pornography.

Police have confiscated the man’s computer and found images which could depict minors in sexual situations.

The man’s DNA is also being compared to evidence in several other unsolved crimes in the area. The Police’s cold-case unit are working on the theory that the murderer of a 31-year-old woman in Falun in 2000 is a truck driver, the same profession as the 42-year-old suspect.

Mats Nygårds emphasises however that Sunday’s interrogations will focus on the dissapearance of Engla Höglund.

Police are waiting on the results of forensic tests from the State Criminal Technical Laboratory (SKL) in Linköping. SKL is in the process of analyzing whether the car tracks found close to the girl’s discarded bicycle can be linked to the 42-year-old’s car. The man’s car and other smaller items have been submitted to the laboratory for analysis. Nygårds believes that the first test results will be returned on Monday.