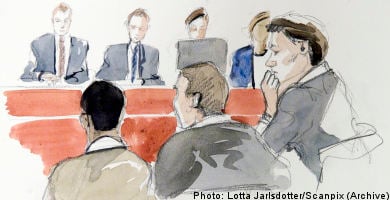 The boy had previously given information to the police and in Stockholm District Court about the involvement of several teens indicted for their role in Campogiani’s death.

Campogiani died from injuries suffered in a vicious beating after leaving a party held on the Stockholm island of Kungsholmen.

During Tuesday’s appeals court hearing the boy delivered news which brought the entire court to a standstill.

“I didn’t see anything. I’ve lied about everything. What I said I saw I heard from others and read in the papers,” said the witness.

Since the conclusion District Court proceedings, the boy has felt badly and said he could no longer live with the lie.

“I don’t have any good explanation, but I’m sorry and irritated over what has happened. I’m not trying to protect someone,” he said.

Attorney Leif Silbersky, who is defending one of the indicted 16-year-olds, attacked the witness about earlier delivering a completely senseless story.

“How can we believe you? What purpose did you have in lying? I don’t think you’re telling the truth,” said a visibly upset Silbersky.

The boy was pressured to tell where he got his information. He later told the court the information came from several of Campogiani’s friends.