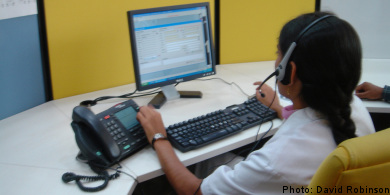 The helpline will be there for presumptive sex offenders that feel obsessive thoughts and want to prevent their thoughts from turning into compulsive actions. This way children and women could be better protected from potential offenders.

“There are those that are borderline, who have obsessive compulsive disorders. They feel the impulses but can’t manage them. They should then have the possibility to call from wherever they are in the country to seek help to overcome these thoughts,” said Åsa Regnér, Secretary General of RFSU.

Speaking at RFSU’s conference in Gothenburg, Regnér continued to say that, “it could prevent these type of offences which would otherwise have such terrible consequences.”

Would-be sex offenders can currently seek help either at the sexual medicine clinic at Huddinge hospital outside of Stockholm or RFSU’s own telephone help line but these resources are stretched.

“The pressure on Huddinge is enormous. They don’t have a chance of treating everyone,” said Regnér.

The high demand on these scarce resources has led Regné and RFSU to join forces with Niklas Långström at the Karolinska Institute, to recommend a national helpline.

Such a helpline would be set up and funded by the state although responsibility for it could be delegated to a public authority, county council or hospital.

“The point is that it should be national and staffed 24/7 by people who are trained to handle these kinds of issues. They could give emergency assistance and also refer callers for further help, depending on where in the country they live,” said Regnér.

According to Regnér there is plenty of expertise across the country around these types of issues, but she would like to see the establishment of more sexual medicine clinics in the longer term.