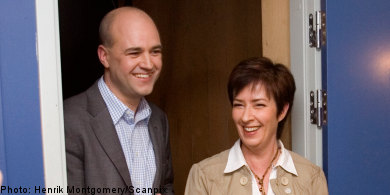 95 percent of the voters who support one of the governing Alliance parties back the competence of Reinfeldt while 85 percent of left-wing voters consider Sahlin more competent.

While Reinfeldt retains a lead in the competence stakes, most voters across the political spectrum would rather have Sahlin as their dinner partner.

58.9 percent consider Sahlin a nicer and more amicable dinner companion while 41.2 percent would rather have the company of Reinfeldt. Sahlin has gained in the popularity stakes from the January poll when she was considered nicer by 54.9 percent of voters in comparison with Reinfeldt’s 45.1 percent.