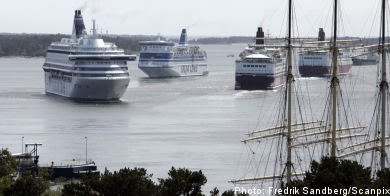 Like Finland, the islands currently set their clocks according to eastern European time (GMT +2).

But last week independent member of parliament Danne Sundman put forward a legislative proposal that the islands, located roughly midway between mainland Sweden and Finland in the middle of the Baltic Sea, should abandon Finnish time for the central European time zone used by Sweden (GMT +1).

“There are several reasons why it makes sense for Åland to be on Swedish time,” Sundman told The Local.

“Being on Finnish time means that everything on TV here runs an hour later. It may not sound like a big deal, but there are a lot of people who complain about television times being too late,” he said.

Equally important, according to Sundman, is the need for Åland to better cater to the needs of Swedish ferry boat tourists, which are an important part of the islands’ economy.

“It can be hard for them to keep track of whether they are one hour ahead or one hour behind,” he said.

“Things can get rather confusing for them if they are only coming here on a day trip.”

Sundman is not the first person to propose the idea of adopting Swedish time, but his legislative motion has gotten Åland’s residents to seriously consider the question.

And support for the change appears to be growing.

A poll on the website of the Ålandstidningen newspaper shows a majority of respondents favour the change.

“More and more people are thinking like me,” said Sundman.

Critics of the switch from Finnish time to Swedish time fear that the move would create a barrier with Finland, and that it would result in the sun setting even earlier.

To those worried about dark afternoons, Sundman responds that the time would be made up by sunnier mornings.

As to the relationship between Åland and Finland, Sundman is frank.

“Mentally, I think we are closer to Sweden,” he said.

However, Sundman was careful not to overplay the significance of the time zone switch as an embrace of Sweden at the expense the islands’ ties with Finland.

“Of course the change would have some symbolic significance, but it’s more for practical reasons than anything else,” he said.

If Sundman’s proposal is approved by Åland’s parliament, Åland residents must then petition authorities in Finland, who would represent Åland’s case internationally.

If all goes well, according to Sundman, in about a year’s time Swedes disembarking from ferry boats in Åland’s harbours would be able to forget about resetting their watches.