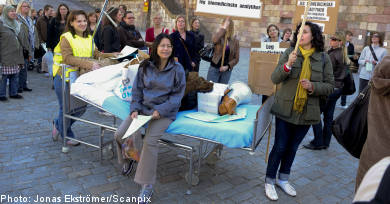 On Tuesday and Wednesday employer and trade union groups in five counties held talks over the potential danger to society of the strike called by the Swedish Association of Health Professionals (Vårdförbundet). In most cases, both sides agreed that the level of healthcare on offer remained at an acceptable level.

In Skåne however, 15 of Vårdförbundet’s mebers were exempted from the strike in order to prepare three places at the intensive care unit in Ystad and a further 20 in the cancer wing at the hospital in Helsingborg.

Stockholm county has reached an agreement with the nurses association over an acceptable level of safety for the duration of the conflict, primarily with regard to x-ray departments.

The negotiations in the capital concerned some 500 nurses working with x-rays, anesthetics and at laboratories.